One young pilot’s tips for others who aspire to fly 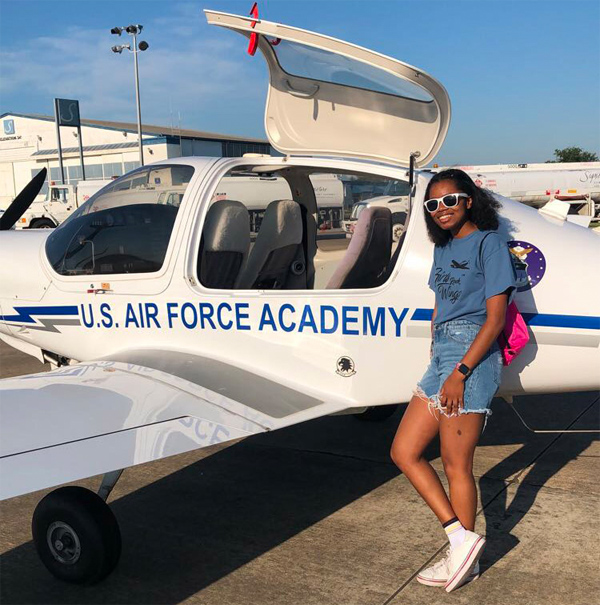 London Holmes checks out an Air Force Academy plane in Houston. She’s looking forward to a seminar at the Academy in Colorado Springs in June. (Courtesy London Holmes)

London Holmes grew up fascinated by the planes she could see from her house as they took off from Boeing Field and Renton Municipal Airport. By age 14, she was immersed in aerospace education programs — and now, at 17, she’s poised to get her private pilot’s license. Her plan is to become a military pilot, and possibly eventually fly commercial airplanes, too. “I’m a huge aviation nerd,” she admits. “I can live, drink and breathe aviation.”

Holmes is attending Alaska Airlines’ Aviation Day for the first time on Saturday, May 4. Now in its 11thyear, Aviation Day brings more than 1,200 young people from around Western Washington to Alaska’s hangar at Sea-Tac International Airport. They get to meet pilots, engineers, flight attendants and technicians working in a wide variety of aviation jobs at Alaska, Boeing, the FAA and the Port of Seattle. They also can connect with educators, military representatives and corporate recruiters to chart potential career paths. Aviation Day is possible because of the efforts of Alaska employees who lead the event, along with partners including Boeing, Port of Seattle, Aerostrat, the Boy Scouts, Girl Scouts and The Museum of Flight. (Read more about Holmes’ story and Aviation Day.)

Holmes appreciates the support she’s received from organizations that help aspiring young pilots, as well as from mentors like Alaska Airlines First Officer Kim Ford. And she’s eager to share what she’s learned. “It’s important for me to give back to other girls in aviation because I have had really great mentors,” Holmes says. “I’ve had really great opportunities. I’ve received great scholarships and I want to give back because I know how amazing it feels.”

For people who worry about the costs of pilot training, Holmes reassures them that it’s possible with help. “I could not pay for flight training by myself. It’s just too expensive,” she says. Her pilot-training costs are covered by a scholarship from the LeRoy W. Homer Jr. Foundation. “It’s just a really great time to be in aviation because there are so many resources.”

Here are several organizations that Holmes and Ford recommend aspiring aviators check out.

Holmes says this should be the first stop for young people around Puget Sound who are curious about aviation. “I know that some people aren’t sure about aviation. This is a great introductory course — especially if you live in the area because it’s free. And these are people your age who also have an interest in aviation.”

Holmes attends this after-school program for juniors and seniors two hours a day, four days a week, and she’ll earn both high school and college credits. “It’s really cool because six of the students that I took the Private Pilot Ground School course with when I was 14 years old are in the class now.”

These day camps are offered year-round for students of all ages who are interested in scientific pursuits.

Created in honor of Anderson, a Washington native and the payload commander of the Space Shuttle Columbia, this free educational program is offered to Washington state middle-schoolers.

Red-Tailed Hawks Flying Club, a chapter of the Black Pilots of America

Scholarship Opportunities and Other Resources

The Ninety-Nines, an international organization of women’s pilots

Sisters of the Skies

Sisters of the Skies is an organization of black women pilots offering scholarships, mentorships and an outreach program called “Girls Rock Wings.” This year, Alaska Airlines made a commitment with Sisters of the Skies to significantly increase the number of female African-American pilots by 2025.

These two programs honor the legacy of the Tuskegee Airmen by offering flight training, camps and STEM programs.